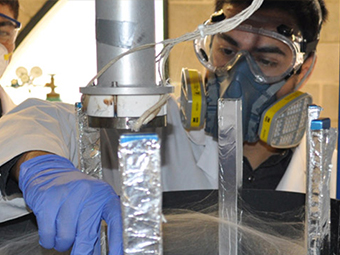 As the devices are scaling down, the combinational logic will become susceptible to soft errors. The conventional soft error tolerant methods for soft errors on combinational logic do not provide enough high soft error tolerant capability with reasonably small performance penalty. This paper investigates the feasibility of designing quasi-delay insensitive (QDI) asynchronous circuits for high soft error tolerance. We analyze the behavior of null convention logic (NCL) circuits in the presence of particle strikes, and propose an asynchronous pipeline for soft-error correction and a novel technique to improve the robustness of threshold gates, which are basic components in NCL, against particle strikes by using Schmitt trigger circuit and resizing the feedback transistor. Experimental results show that the proposed threshold gates do not generate soft errors under the strike of a particle within a certain energy range if a proper transistor size is applied. The penalties, such as delay and power consumption, are also presented.

© 2010 IEEE. Personal use of this material is permitted. Permission from IEEE must be obtained for all other uses, in any current or future media, including reprinting/republishing this material for advertising or promotional purposes, creating new collective works, for resale or redistribution to servers or lists, or reuse of any copyrighted component of this work in other works.