The elongated “T” plan Cavalry building was used to house Cavalry units until WWI, when it became the Quartermaster warehouse and commissary. A devastating hurricane on September 4-5, 1933, struck Brownsville and caused extensive damage to the post. Winds were estimated at 125 miles an hour after 106 wind gusts blew the anemometer away.

One of the buildings on the fort that received damage was the Cavalry Building No. 113. A larger (100 feet longer) but identical Artillery barracks (No. 133), built by Wainwright near the area where the Brownsville Compress towers now stand, was heavily damaged and was deemed “not habitable” on the Post Engineer’s Record. It was probably too far removed from the active base and no longer needed to warrant repairs. Much of the Cavalry Quarters veranda must have been damaged and removed, as it does not appear on either post records. Runyon photographs show how the porch looked in the early 1900s. They are also a record of the building’s appearance before the north wing extension was added. Old bricks juxtaposed by new bricks make this noticeable.

Repairs were made in June, 1934. By the 1930s, the T-plan structure’s central block was used as the Main Post Quartermaster’s Office sales commissary office with the Commissary, Clothing and Equipage Storeroom in the north wing and subsistence storeroom in the south. Partitioned walls are shown in detailed 1936 floor plans, with little change to space usage. Revised records from 1942 label it as the Post Commissary with both wings as storerooms and an exterior wood framed “issue shed” attached to the north wing. A roofed, open passageway separated the main block from the central block. It is not known when the central block was attached to the main by brick.

Maps show there were two brick N.C.O. officers' duplexes and a garage where the Smith Amphitheater and parking lot are presently located. There was a “wash rack” on the corner of Gorgas Drive and Ringgold Road. There was also a laundry and “motor transport” building for the 12th cavalry across the street from where the New Student Union is now located. Adjacent to the west wing and across the street where the Bookstore now sits stood a shoe repair shop and medical dispensary for the 124th cavalry. A wide-open corral in front of Cavalry extended up to the entrance of the Rusteberg building. Four warehouses once stood where the Life, Health and Sciences Building is located. Two barracks buildings were constructed behind Building 113 around 1940and were removed in the late 1990s. A small plate with number “113” can still be seen above the entrance.

The Cavalry building was not immediately used by the college. A Sanborn fire insurance map from 1949 indicates the west wing was used by Sears & Roebuck for warehouse storage and the east wing to house auto supplies storage with a cold storage room at the far end. The central block is labeled as general storage. Other former Army buildings belonging to the city behind Cavalry appear to have also been used as commercial rental spaces bordered by Brownsville Compress warehouses. These compress warehouses were former hay barns.

The building appears to have been used by the college throughout the 1980s for electronics technology classrooms. Campus Police, which was once in the Old Morgue building and later in Building 23 (Married Officers' Quarters) during the mid to late 1980s, later moved into Cavalry with Student Health Services with room for computer classrooms. Renovation and reconstruction of roofed porches were planned by Design Five Architects and contracted to the Jearel Adams Construction Co. It is still in use by Campus Police, and Student Health Services had relocated to the Cortez complex. The east wing is used by Computer Sciences and Computer Information Systems. (This information was written in 2004) 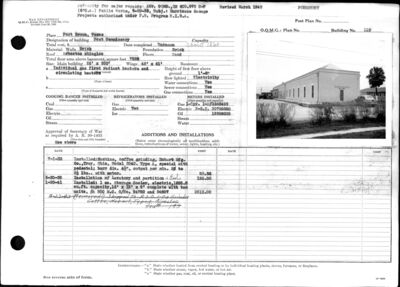