The Regiment House has been called by many names. Although small in stature, it has a diverse history. Not only has its use and title changed many times since it was built, it has also misled some local historians into reporting it as being located at different places. Once affectionately known as “The Little Chapel at Fort Brown,” it originally stood with its back to the Rio Grande and faced the parade grounds near the present Gateway International Bridge and Customs facilities. Sources noted it had “been moved from its original location to a point near the international bridge.” Another account described the chapel as once being located near the Jefferson entrance and used as a school for African-American soldiers. These minor errors that crept into historical record made Building No. 2. an interesting study. There were actually two chapels; each one moved one time and still in use today. The first chapel was originally built to be used as a school and library. In 1889, plans were originally designed for it to be made of wood. However, a hurricane in 1880 may have convinced the Army that a brick building would last longer. Maps showed that building No. 2 was built between 1882 and 1884. It was used as a school until 1907. Between 1907 and 1922 its use is uncertain. From 1922 to 1941 it was used as a Post Chapel, N.C.O. “Bachelors'” Quarters, Officers’ Guests Quarters, Post Office and N.C.O. Quarters, and the Chaplain’s office prior to October 1941 as will be explained later. Earliest Post Engineer’s records show that a single 20’ x 30’ ft. bedroom and 16’ x 18’ living room comprised the floor space with an open porch. At that time it listed a capacity for 50 persons. “The larger room was the chapel’s auditorium, while the smaller room was its vestry.” Later records show the building was divided with a hall to make three bedrooms and small kitchen to house a single family by 1938. It was also painted at one time. By then, the. porch was screened. 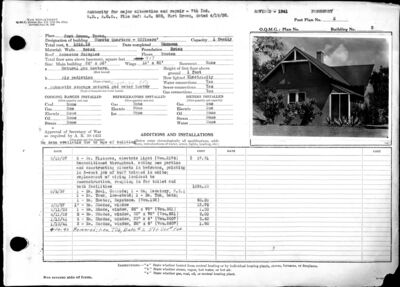