Black and white photograph. "Texas State Rangers from left to right Hubert Brady, John Edds, Charlie Wright U.S. Customs Officer, Frank Smith, Jack Webb, Roy Miller, Captain Will Wright and Lizzy Captain Wright's company pack mule. This picture was taken shortly after the Rangers had a gun fight with a party of tequila smugglers near the town of Mirando city [Texas] about 1500 bottles of the devil's brew was seized on many pack horses the liquor was from Guerrero Mexico [Tamaulipas] a few of the pack horses can be seen in this picture each horse was carrying 80 hotels amounting to a load of about 165 pounds each. Most of the horses were from Mexico according to their brands but several were horses that had been stolen from ranchers on the Texas side." 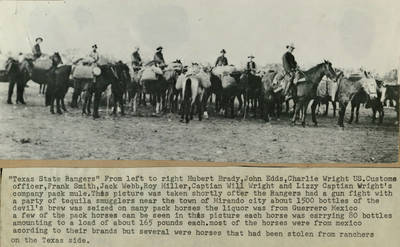