Black and white photographs. Three Photographs. "Of the many revolutionary leaders that were active in Mexico Pancho Villar was the only one that made a personal raid on the United States and that happened on the night of March 9th 1916. Villa with about 300 of his bandits made a raid on the town of Columbus, New Mexico the story is in the book. See page #130 in the book long story." "These fellows are very dirty, I took this picture, but I kept my distance they stink was very unpleasant. All of Villa's people were like this, and he was dirty himself." "Some of Villa's men looking around" " General Venustiano Carranza center at that time President of Mexico this was a meeting with Colonel Blocksum District Commander at the International Bridge Brownsville 5/20/1917." "Short time after this picture was taken Carranza was murdered while he was asleep in his home in Mexico City." "Lucio Blanco, the fellow with the laced boots, a revolutionist in 1913 along with all of the others, he was a big friend of Mr. Frank Rabb of Brownsville who in many ways assisted Blanco." 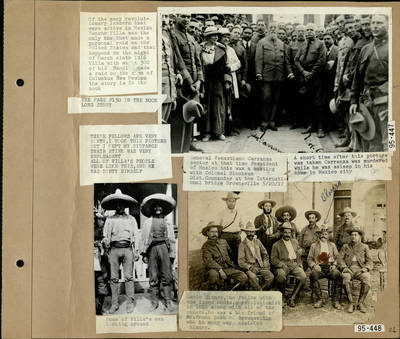