Old Fort Brown is situated on the bank of the Rio Grande, south of the city of Brownsville and was constructed by General Taylor and his entire command in 1846. During the battle with Mexicans May 8th and 9th, 1846, it was defended by about fifty American soldiers under Major Jacob Brown who was killed in action. The Fort was named after him. The Fort Brown Reservation consists of 285 acres enclosed partially by a brick wall about six feet high. The Cemetery, situated on the little island in the garrison reservation, from 1865 to 1909 was the testing place of many of Taylor's men who was killed in battle, and those who died at Matamoros thereafter. Also, until 1909 it was used as a National Cemetery and contained the bodies of many Union Soldiers killed in Texas during the war between the American States. The bodies were removed to Alexandria, La., during 1909, under the direction of General John L. Clem. The Original Buildings which composed the garrison were set afire by General H. P. Bee, on November 3, 1863 and destroyed. The present buildings were erected in 1868. BROWNSVILLE, TEXAS. Brownsville, Cameron County Texas, is situated on the Rio Grande twenty miles from the Gulf of Mexico. Just across the Rio Grande is Matamoros, Mexico, which is a very old and ancient town. The town site of Brownsville was covered with cactus when General Taylor triumphantly entered the territory May 9th, 1846. Only a few Mexican Families were living in their Jacales, about where the City Water Works now stands. The first building after American occupation still stands on the northeast corner of Twelfth and Levee Streets. The Rio Grande Railroad from Brownsville to Point Isabel, a narrow gage railroad with wood burning locomotives, was completed and first operated May 1st, 1872. St. Louis, Brownville and Mexico Railway was completed from Robstown to Brownsville, June 1904. The International Bridge across the Rio Grande between Brownsville, Texas and Matamoros, Mexico was completed in 1909. The Cameron County Court House was erected in the year of 1912 at a cost of two hundred thousand dollars. It is the most beautiful building in Southern Texas. The Post Office, known as the Federal Building was completed and first occupied November 1st, 1892. The First National Bank and The Merchants National Bank Buildings were both built and occupied the same year, 1912. The Old Market House between Washington and Adams Streets was built in 1858; remodeled 1911. Extracts from "Frank C. Pierce's Brief History of the Lower Rio Grande Valley" 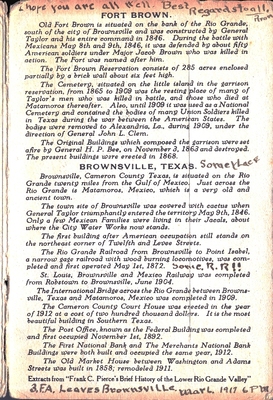