Black and white photograph of letter. "Whereas, Francisco Yturria of Brownsville, Texas, by taking part in the late rebellion against the Government of the United States has made himself liable to heavy pains and penalties. And whereas, the circumstances of his case render him a higher object of Executive clemency; Now therefore, be it known, that I, Andrew Johnson, President of the United States of American, in consideration of the premises, divers other good and sufficient reasons me __ moving, do hereby grant to the said Francisco Yturria a full pardon and amnesty for all offenses by him committed, arising from participation, direct or implied, in the said rebellion, conditioned as follows. 1st. This pardon to be of no effect until the said Francisco Yturria shall take the oath prescribed in the Proclamation of the President: May 29th, 1865. 2nd. To be void and of no effect if the said Francisco Yturria shall hereafter, at any time, acquire any property in slaves, or make use of slave labor." 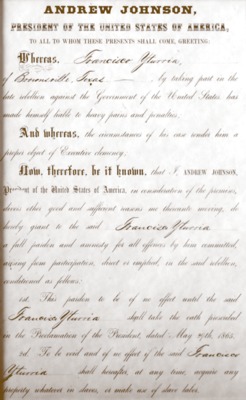