Hand-colored postcard. History of Matamoros from 1765 until 1913.

"MATAMOROS, MEXICO. H. Matamoros, Tamaulipas, Mexico is situated in Northeast Mexico in the State of Tamaulipas on the Rio Grande about 30 miles from the Gulf of Mexico. From 1765 to 1796. Matamoros was known as San Juan de los Esteros and after 1796 it was named Congregation del Refugio until 1821, when it was organized as a village and named Matamoros to commemorate the martyr, priest Mariano Matamoros, who had lost his life in the Mexican wars of Independence. In 1826 Matamoros was surveyed and organized into a city and its growth was slow until after the War with the United States in 1846 and 1847, then it progressed very rapidly and reached its maximum size during the American Civil War. The population during 1865 was about 40.000 and from then it has gradually diminished to about 10.000, its present population The citizens of Matamoros successfully defended the city against Jose Maria Carvajal in the year of 1851 and received the title "HEROIC" from both the state and city hence H. Matamoros. General Zachary Taylor occupied Matamoros May 18th, 1846 with his army. The Imperialist army commanded by General Tomas Mejia occupied Matamoros Sept. 26th. 1864 and the French. Belgians, and Austrians, embarked on the steamboat Antonio June 23rd, 1866 and departed for home. Other important events. Bloody fighting between the CRINOLINOS and ROJOS, Oct. 1861. American troops crossed to Matamoros to guard the American Consulate during fierce fighting Jan. 12th. 1864. Col. Thomas Sedgwick built a pontoon bridge across the Rio Grande and took up a position in Matamoros to protect American lives and property during fierce fighting November 1866. On April 2. 1876 Don Porfirio Diaz, crossed the Rio Grande and occupied Matamoros with a few followers. President Diaz ruled Mexico until 1880, was reelected President in 1884 and continued in power until 1911. Lucio Blanco captured Matamoros after a fierce and bloody battle June 3, 1913. Places of interest. La Capilla the catholic church situated on east side of the Plaza de Capilla was built 1842. The Cathedral on the east side of Plaza de Armas was begun in 1825 and completed in 1831. The Street railway was first operated in 1872. It was operated by mule power until 1923 when it was changed to operate with Ford Motors. Casa Mata, known as the OLD FORT was built in 1865 and has been used as a fort and arsenal until about 1911. The National Railway from Matamoros to Monterrey was constructed as far as San Miguel de las Cuevas in 1881-1882 and completed to Monterrey in 1904. Cotton is the chief product of northeast Mexico and there are many thousand bales shipped from Matamoros each year. The Photographs from which the colored plates were made are all original photographs made by Robert Runyon, Brownsville. Texas." 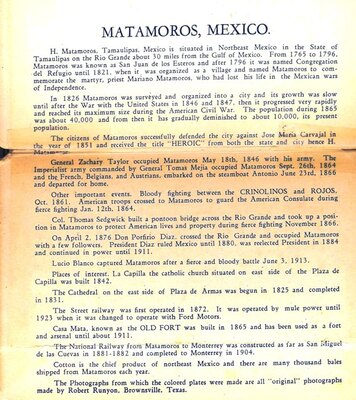